The Flat Earth: Fact or Fiction 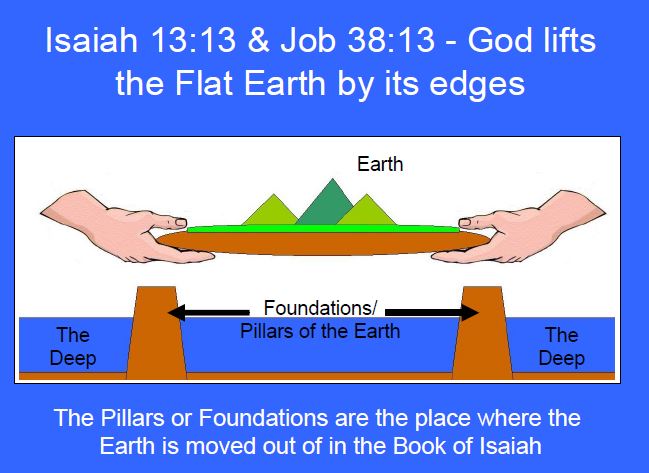 We are told that the earth rotates at 1,000mph, that it travels around our Sun at 67,000mph and that our solar system travels around the Milky Way at 500,000mph. Do you really think that? Before you answer, think of what just hurricane wind speed does to trees, houses and people; multiply that by 100s of times and what do you think of? For me, I realize that all life would be wiped off the earth. Yet, we are told that even our delicate atmosphere can remain intact. Amazing! Well, I don’t buy it.

Oh, I forgot to tell you, that our “illustrious astronomers” tell us that our galaxy (along with us, of course) is travelling from the centre of the “Big Bang” at 670,000,000 mph (that’s the speed of light folks)? What rubbish!

“What about the lark which, at early morn, soars aloft, trilling its lays of luscious melody? Why was it not swept away in the tumultuous atmosphere? But it still continues singing, in happy ignorance of any commotion in the heavens. Who has not noticed, on a calm Summer day, the thistle-down floating listlessly in the air, and the smoke ascending, straight as an arrow, from the peasant’s cottage? Would not such light things as thistle-down and smoke have to obey the impulse and go with the Earth also? But they do not.” -David Wardlaw Scott, “Terra Firma”

“If the atmosphere rushes forward from west to east continually, we are again obliged to conclude that whatever floats or is suspended in it, at any altitude, must of necessity partake of its eastward motion. A piece of cork, or any other body floating in still water, will be motionless, but let the water be put in motion, in any direction whatever, and the floating bodies will move with it, in the same direction and with the same velocity. Let the experiment be tried in every possible way, and these results will invariable follow. Hence if the earth’s atmosphere is in constant motion from west to east, all the different strata which are known to exist in it, and all the various kinds of clouds and vapours which float in it must of mechanical necessity move rapidly eastwards. But what is the fact? If we fix upon any star as a standard or datum outside the visible atmosphere, we may sometimes observe a stratum of clouds going for hours together in a direction the very opposite to that in which the earth is supposed to be moving. Not only may a stratum of clouds be seen moving rapidly from east to west, but at the same moment other strata may often be seen moving from north to south, and from south to north. It is a fact well known to aeronauts, that several strata of atmospheric air are often moving in as many different directions at the same time … On almost any moonlight and cloudy night, different strata may be seen not only moving in different directions but, at the same time, moving with different velocities; some floating past the face of the moon rapidly and uniformly, and others passing gently along, sometimes becoming stationary, then starting fitfully into motion, and often standing still for minutes together.” -Samuel Rowbotham, “Zetetic Astronomy, Earth Not a Globe!” Subscribe to our newsletter to learn more about the flat earth - fact or fiction.

Introduce people to your website and your purpose. Let your visitors know about your mission or the people, products, or services that make your brand special.

Let your visitors know how they can ask questions, get more information about your product or service, or just stay in touch. Add important contact details like your location, phone number, or email address.

T-shirt
$1.00
To get started, choose a product to sell from your store. Then, describe what makes your product unique or gift-worthy. We'll automatically add a payment form so visitors can buy directly from your website.
Buy Now

Use this space to let people know why they would want to hear from you. Tell them about a special offer, a limited time promotion, or the important updates they'll receive after they sign up.